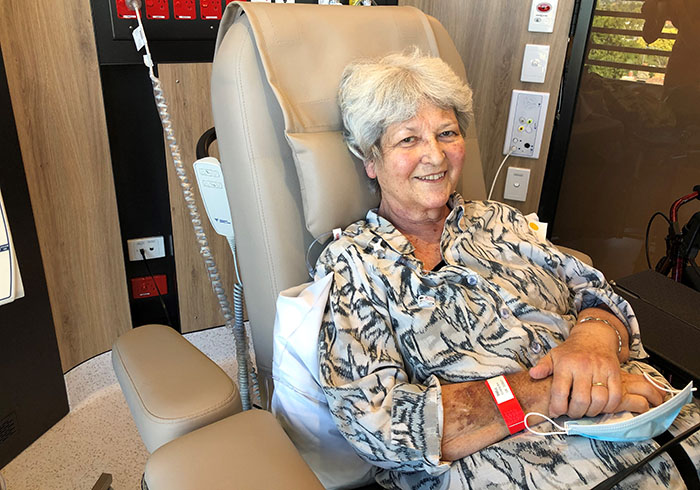 It’s hard to imagine what life has in store for you, but it’s even harder after being diagnosed with a terminal illness.

Unfortunately, this has been the reality for 69-year-old Loretta.

The mother of five and grandmother of 11 was diagnosed with ovarian cancer in April 2017. But after surgery and more than two years of chemotherapy she stopped responding to treatment.

In May 2020, Prof Gary Richardson OAM, Director of the Szalmuk Family Department of Medical Oncology, suggested Loretta may be eligible to join one of Cabrini’s oncology clinical trials.

Known only as study FN1501, the trial is a phase one study, meaning it is in the earliest stage of testing the effectiveness of the drug in humans.

For Loretta, the clinical trial was the only treatment option left. There were simply no other options on the table.

Loretta said Prof Richardson sent her home with some information about the new drug, a tyrosine kinase inhibitor, and told her to speak to her GP.

“There was no alternative, so I decided to go ahead,” Loretta said.

“I didn’t think about it at the time, I was just taking the steps as they were coming.”

It has now been a year since Loretta started the trial and, in an incredible turn of events, her cancer remains stable, which in the medical world is a win.

“I’m just on this for as long as it works. I don’t think I’ve got a long future, but you just don’t know,” she said.

“I’m very grateful to have access to this trial, the hospital is very good, I’m well looked after, and the staff are very consistent, efficient and kind.

“It’s also good to be part of whatever helps other people, and you’re also helping yourself. It’s a great opportunity for me, I’m very grateful for this. I’m fortunate I’m at a hospital that does research.”

Loretta, who has been retired for the past 10 years, said although she felt lucky to be on the trial, it was a vigorous treatment routine.

She travels from her home in Wheelers Hill into Cabrini Malvern on Monday, Wednesday and Friday every week for two weeks and then has one week off. Loretta also has a CT scan every six weeks to see how she’s tracking.

“I’m fortunate because my husband is retired and can drive me back and forth,” she said.

“It’s fine because I’ve got a lot of support, it just becomes a way of life.

“I am happy with my life, I have no complaints.”

Associate Team Leader, Oncology Research Kate Hurford is the study coordinator for the clinical trial Loretta is part of.

Kate, who has worked at Cabrini for the past eight years, said intense treatment schedules were a large part of what patients needed to consider before taking part in a clinical trial.

She said the FN1501 trial was a phase one study, meaning it looks at establishing the safety and correct dosage to give patients.

“The drug is a small molecule inhibitor that stops growth signalling, by blocking some of the pathways involved in normal cell growth,” Kate said.

“Because the trial is in the early stages, the hope is they can determine the best dose to give patients, and also identify what side effects there are and if it helps to shrink cancers or stop their growth.”

Kate said being part of Cabrini’s research team meant she was at the forefront of life-changing developments, with the added bonus of getting to know patients.

“I like liaising with so many different people – from nurses to medical imaging and pathology staff, and the patients – they’re all an incredible part of what we do,” she said.

“I love that my day is never the same, and I’m still learning – that’s something else that I really enjoy.”

“She is being treated with a drug that targets a specific growth pathway in cancer cells,” he said.

“Targeting this pathway stops cancer growth and causes the cells to “commit suicide”, also called apoptosis. We are delighted to now have drugs like this at our disposal to help patients.”