An important message from one woman to another 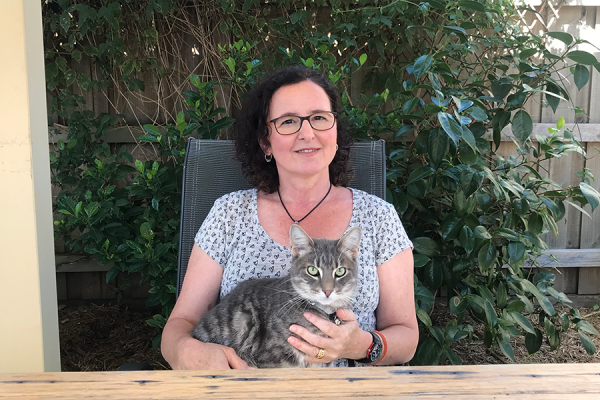 If you ask Marisa Daicos what advice she would give to other women, it would be to stop making excuses.

It’s been three and a half years since the mother-of-two was diagnosed with advanced ovarian cancer.

She said she felt her body had “tricked her” and wishes she had seen a doctor sooner, but instead put her symptoms down to menopause and food intolerances.

“If we could just get all women to stop and think about whether they have got any of the symptoms and not brush them aside, but do something about it. Even if it’s just in the month of February,” Marisa said.

“I feel totally tricked by my body. It could have been menopause or the food I was eating. I did have fatigue, but I put that down to sleepless nights. Women make too many excuses for the way we are feeling. Make this the month to get checked out.”

As part of Ovarian Cancer Awareness Month, Marisa is sharing her story in the hope of raising awareness and encouraging other women make their health a priority.

The 52-year old said she had been suffering from bloating and pelvic pain for a few months before going to her GP for a check-up.

She was sent for a number of tests, including an internal ultrasound, and nothing showed up.

But when her blood results came back, Marisa was immediately sent for a CT scan, which showed shadowing around her abdomen.

“He was pretty straight to the point and said there was a good chance it was advanced ovarian cancer. He organised a laparoscopy for the next day.

“I was pretty numb. The only way to cope was to tell myself it was all going to be fine. But I was in shock. Once I’d organised the paper work, I got into the car and just lost it.”

Following the laparoscopy, Marisa’s worst thought became a reality and she was diagnosed with ovarian cancer. Just two days later she underwent a total hysterectomy. After six days in hospital she went home before returning to Cabrini Brighton for chemotherapy four weeks later.

Just 12 months after her initial diagnosis, Marisa’s cancer markers started to rise. On New Year’s Eve 2019, she was told her cancer had returned.

Marisa started chemotherapy that day – two weeks on and one week off for four rounds – but the chemotherapy wasn’t working. She had become chemo resistant.

In March 2020, Marisa started on Olaparib, a twice-daily tablet, and Avastin, an in-hospital treatment every three weeks. Now, she’s in remission.

“I’m just going to keep taking what I’m taking and doing what I’m doing for as long as I can,” she said.

Marisa said the gratitude she felt towards her GP, specialist and healthcare staff in general was overwhelming.

“From day one, from my GP to Prof Jobling, to all the nurses, and my oncologist Prof Gary Richardson – they all have been amazing. They become like family. The kindness and the love people show – it’s just really amazing. I don’t know how I would have done it without them. I can’t thank them enough, nothing I can say will express my gratitude,” she said.

“I’ve never lost hope. There was just no way I could leave my kids, so I just kept hoping and praying that this wasn’t my time. I thank god these drugs have worked for me and I’m so grateful for that.”

For more information on Cabrini’s cancer services, go to www.cabrini.com.au/cancer