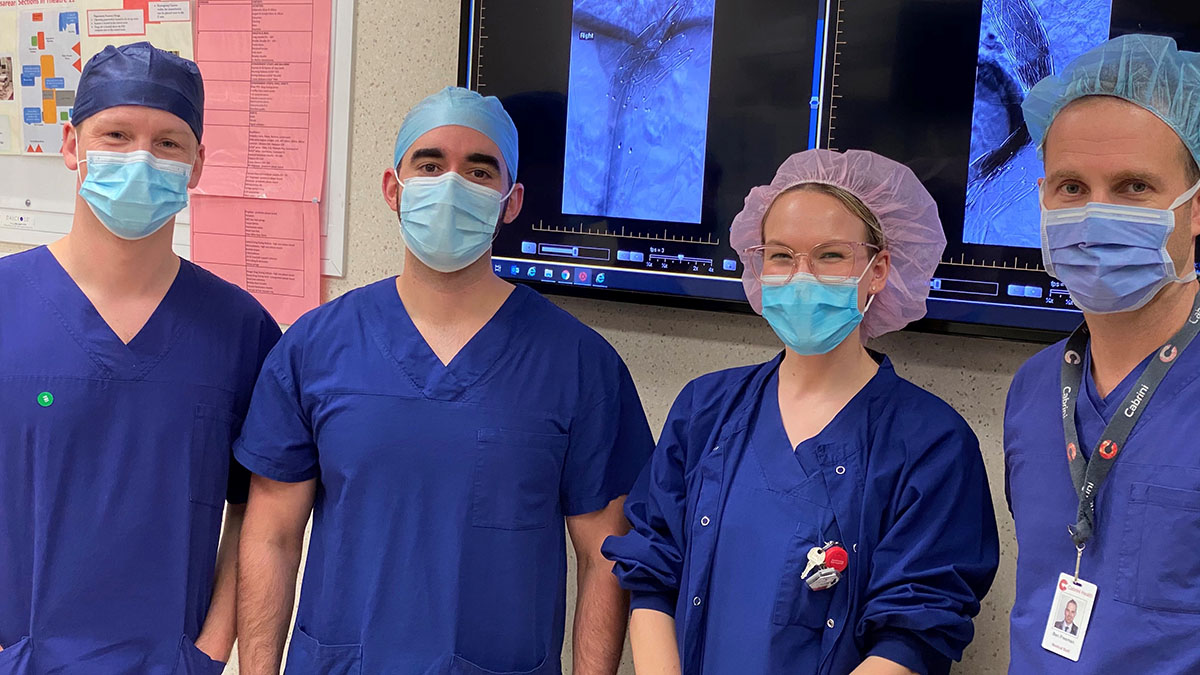 This year at Cabrini, our community of healthcare workers have been faced with endless challenges. But nothing has stopped them from performing at their very best, including Cabrini Vascular and Endovascular Surgeon Mr Charles Milne, who managed to perform an Australian-first procedure during the global pandemic.

His patient, 74-year-old Grant Coombs, had previously suffered an aortic dissection, where the walls of the aorta split, creating two channels of blood and a weakened wall of the aorta. This resulted in Mr Coombs having an emergency open repair of the aortic arch in 2018, which controlled the origin of the problem, but in the following months the dissection slowly caused an aneurysm to form in his chest.

The aneurysm was large, meaning it was possible it could rupture and bleed into his chest, which would likely be an unsurvivable event.

Mr Milne said the challenges faced were working out the best way to treat the aneurysm, whilst also being conscious of the rapidly increasing numbers of COVID-19 cases in Victoria.

The anatomy presented several challenges, but Mr Milne was aware of a new device called a ‘false lumen occlusion device’. “The device was developed by Tilo Kolbel, a prominent aortic surgeon in Hamburg, in partnership with Cook Medical. It was designed as an adjunct treatment for aortic dissection.”

“The technology in vascular surgery is constantly evolving, and so in order to progress, you have to be willing to evolve too,” Mr Milne said.

“The device is designed to simplify the process of depressurising the false channel in the aorta, and prevent procedures (often multiple) in the future – a big win for the patient.”

“We perform our aortic procedures in the hybrid theatre at Cabrini. The angiographic equipment has ‘fusion software’, which superimposes the patient vessel anatomy on the x-ray screen during the procedure. This is a vital tool during complex procedures.”

It wasn’t until after Mr Milne had performed the surgery that he was informed it was the first time this device had been used in Australia.

“It was a nice international collaboration. I had met Tilo Kolbel in 2015 whilst I was in France on a fellowship. I contacted him to discuss Mr Coombs’ case, and he kindly helped with the planning. The device was manufactured in Germany by Cook Medical and flown to Australia.”

Mr Milne said that before the operation took place in mid-March, Mr Coombs was self-isolating at home due to the first wave of Covid-19. “We had to balance the risks to the patient. Do we just crack on and get the operation done, or do we hold fast and wait until the first wave is over. We needed to weigh up the risk of rupture of the aneurysm versus the risks associated with Covid-19.” Mr Milne said.
We discussed it with the patient and decided to go ahead with the operation.”

‘This was absolutely a team effort.’ We are so lucky with the staff and expertise at Cabrini Hospital. The surgical team, anaesthetic team, nursing staff, radiography staff, and theatre support staff were all critical in achieving a good outcome. Also, we are always well supported by Cook Medical.

It’s now been six months since his life-saving operation and Mr Coombs said he felt like a different man.

Splitting his time between his apartment in South Yarra and on the family farm in Yarck, Mr Coombs said prior to his surgery he was suffering from extreme weakness.

“A short walk to the car was just exhausting,” Mr Coombs said.

“But now I’m absolutely fine. I’m back on the farm driving tractors and chain-sawing trees.”

When asked how he felt coming into the hospital for his operation during the pandemic, the grandfather-of-four said while initially he had concerns he knew he was in good hands.

“Charles instilled a lot of confidence in me. I knew I had a star – he’s no ordinary bloke. And as for the nurses, I always refer to them as my angels, they were just so important.”