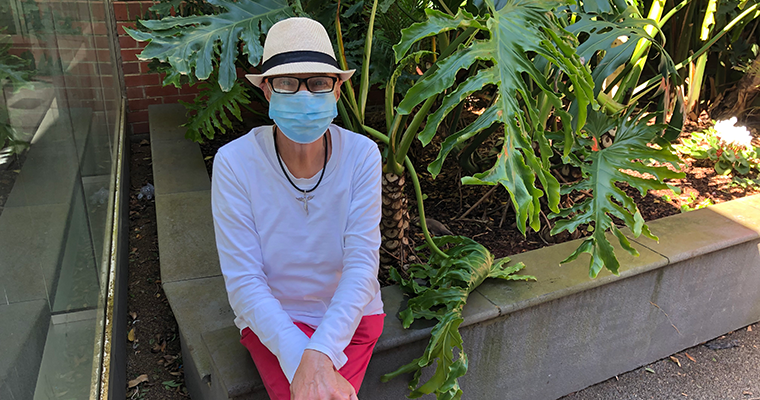 After experiencing sharp pains in her stomach, weight loss and a general feeling of tiredness, Miche’s partner suggested she head to her GP for a checkup.

Following a blood test on 24 May, Miche was called back in for a gastroscopy and colonoscopy on 29 May.

Just three days later her world was turned upside down.

Expecting it may be her appendix, Miche was shocked to discover doctors had found a 10cm mass and she was diagnosed with Mantle Cell Lymphoma.

As part of World Lymphoma Awareness Day (15 September) and Blood Cancer Awareness Month, Miche is sharing her story in the hope of potentially saving a life.

The 69-year-old from Oakleigh said it was a diagnosis that completely “rocked my world”.

“The first thing the doctor said was ‘don’t google it’,” Miche said.

“I was just in shock.

“The worst part about this whole journey was telling my 93-year-old mum.”

“Both Kirsten and Suzanne have been with me every step of the way and the support they’ve given me has filled me with confidence and inspiration,” Miche said.

“Their co-ordination in ensuring that I receive the very best of care is massive.

“I haven’t experienced one negative since walking through Cabrini’s doors for the first time, I have received nothing but abundant care and from the ground floor up, smiling eyes above masks.”

Miche has already undergone five rounds of chemotherapy, with her sixth and final round booked for later this month.

For each treatment Miche spends two and a half days at Cabrini as an inpatient and for the remainder she is treated as an outpatient in our day oncology unit.

And although her life as she knew it has gone in a direction she never expected, Miche’s outlook on the future is filled with positivity.

“I have a brother, a sister, one niece, five nephews, two great nieces and one great nephew – and I’m going to be there for each of their 21st birthdays,” she said.

Miche said her advice for others is as simple as it is important – get checked.

“I had been a bit cavalier about my health. I hadn’t seen my GP for 10 years, which was a bit stupid,” she said.

“You can make all the excuses in the world but it’s a simple blood test. At least once a year get a checkup, get a full checkup.”

Symptoms of lymphoma include the following:
unexplained fever swelling of one or more lymph glands such as in the neck or armpits swollen abdomen abnormal sweating, especially at night tiredness loss of appetite bruising or bleeding easily weight loss
For more information on Cabrini’s blood cancer services, go to http://www.cabrini.com.au/cancer

To find out more about The Blood Unit, go to www.thebloodunit.com.au