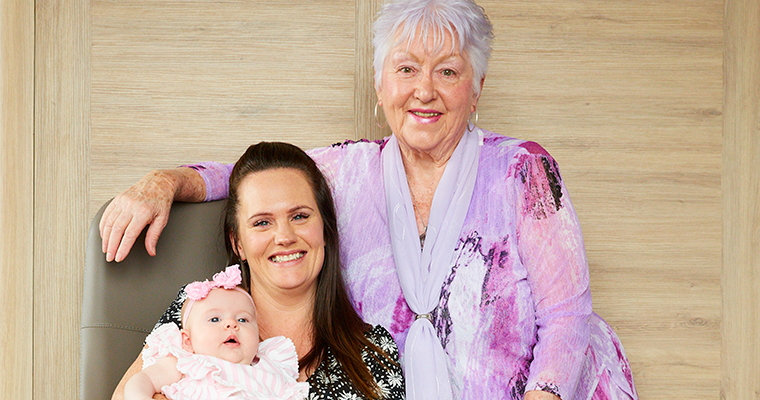 Despite the fact that Grace Jacqualine Breitkreuz will never know her maternal grandmother, she already shares more than just her namesake.

Elaine Snook was one of the first mothers to give birth at Cabrini in 1958, after the maternity ward was opened.

More than 60 years later, her great-granddaughter Grace was born in the very same hospital.

It is a connection that spans four generations.

Ms Snook said she remembered giving birth to daughter Jacqualine Campbell at Cabrini as if it were yesterday.

“It was a foggy morning, the day Jacqualine was born,” Ms Snook recalled.

“Everyone made a big fuss about me at home when my waters broke and I came straight down to Cabrini.

“Jacqualine’s father was a merchant seaman and we were hoping she would be born before he had to depart for sea.
Luckily, she was born three weeks early so he was able to be there for the birth.”

While Cabrini has undergone many changes in the 61 years since Ms Snook gave birth, the hospital still brought back memories for her.

“I remember the nuns, with their headdresses and rosary beads. It was really nice to have that Catholic influence,” Ms Snook said.

Sadly, Ms Snook’s daughter, Jacqualine, died seven years ago, before getting to meet her new granddaughter. But Jacqualine’s daughter Mereki Campbell said having her own daughter at the same hospital where her mother was born made her feel like her mother was watching over her.

“It was lovely to give birth at the same hospital where my mother was born,” Ms Campbell said.