Finding your voice with Cabrini 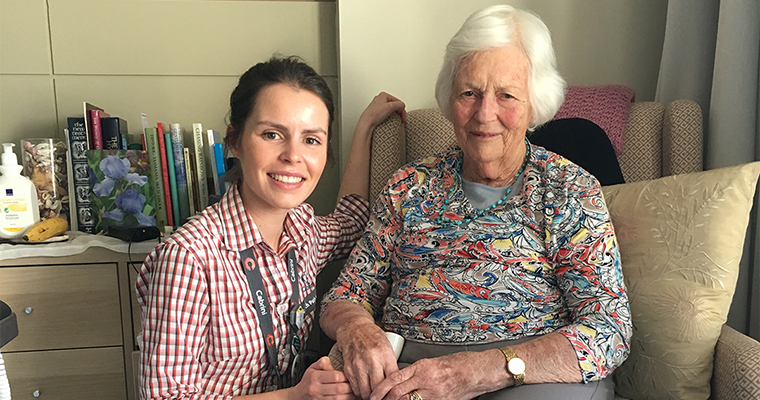 It’s a form of communication we often take for granted, but one that can have a huge impact on our daily lives.

More than 1.2 million Australians have a communication disability, and it usually goes unseen.

At Cabrini we have a team of speech pathologists who work across the board in acute, rehabilitation, palliative care, aged care settings and in-home services.

She said helping patients regain the ability to speak and swallow clearly could be life-changing.

“Communication is such an important part of our daily life but it is something we often take for granted,” Ms Lawson said.

“It can have a significant impact on someone’s quality of life.”

After suffering a fall and being diagnosed with Parkinson’s disease, Jean ‘Margaret’ Hicks was referred to Cabrini’s speech pathology department.

At 88 years old Mrs Hicks was suffering from dysarthria; a speech disorder that results in changes to the clarity, loudness and quality of speech, as well as dysphagia – difficulty swallowing.

Ms Lawson said Mrs Hicks underwent a videofluoroscopy (a video x-ray) of her swallow and was provided with strategies to make her swallow safer.

She also completed a speech therapy program called LSVT LOUD; an intensive four week program targeting speech and voice, with the aim of improving her communication.

“The treatment used has lots of evidence supporting it and lots of positive outcomes,” Ms Lawson said.

“We’re fortunate to have clinicians trained to complete that program. That training program is very successful but she’s also had a great result. It’s really given her a much better quality of life. She’s also highly motivated to continue her practice.”

Mrs Hicks said she went from not attending group situations because of her difficulty being heard to regaining her confidence.

“Before I started the speech therapy, I was fast losing my voice all together, and I was very frightened that I would not have a voice,” Mrs Hicks said.

“Now I’ve got a nice loud voice. My sister who I talk to everyday, said ‘it’s so lovely just to listen to you’.

Since completing her speech pathology program through Cabrini in April, Mrs Hicks now runs her LSVT practice in a group setting at her nursing home and involves her peers.
She attends ParkinSong (a singing group for people with Parkinson’s) regularly and this, combined with her practice group, has inspired the staff at her nursing home to begin a singing group of their own.