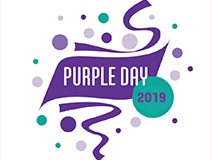 March is Epilepsy Awareness Month and Cabrini is raising awareness of epilepsy with the aim of reducing the stigma of the condition.

Epilepsy is a common brain disorder, which is usually identified by recurring seizures. It can develop at any age, regardless of gender or ethnicity. It is estimated that more than 65 million people worldwide currently live with epilepsy. In Australia, more than 250,000 people live with epilepsy and one in 26 people will have epilepsy at some point in their life.

During Epilepsy Awareness Month, and particularly on Purple Day for Epilepsy on March 26, people are asked to talk about epilepsy and remind those who live with seizures that they are not alone.

Cabrini neurologist Dr Patrick Kwan is an epilepsy specialist and says despite the prevalence of epilepsy, it isn’t a condition that is often in the spotlight.

“Unfortunately, there aren’t as many resources for patients with epilepsy, compared with many other conditions,” he said.

“It is not a widely understood condition and there is a shortage of epilepsy expertise, which can prevent the condition being diagnosed early on.”

“There is still a lot of misunderstanding around diagnosis and treatment options and people are often incorrectly diagnosed or diagnosed too late to have appropriate treatment.”

Dr Kwan said many people suffered from seizures during their lifetime without necessarily having epilepsy.

“Epilepsy is the tendency to have multiple, recurrent seizures that are not provoked. Seizures are the main symptom but there could be other neurocognitive issues associated with it,” he said.

“Patients with epilepsy often have other cognitive and psychiatric problems such as mental health issues that are often overlooked. About a third of epilepsy patients have depression or anxiety and equal proportions will have another cognitive issue associated with the disease.”

“Epilepsy can also develop in patients following a stroke.”

Dr Kwan said there were many treatment options for people with epilepsy that could help control seizures and improve quality of life.

“Many people don’t realise there are other treatment options aside from medication. For some people surgery might be beneficial or even adjusting their diet might improve the condition and reduce seizures,” he said.

“With appropriate treatment, most people with epilepsy can lead normal, active lives.”

“This is when a patient with epilepsy is suddenly found dead. There is not necessarily a witnessed seizure and often occurs when patients are asleep. Up to one in 400 people with severe, uncontrolled epilepsy die from SUDEP each year and we currently do not know what causes SUDEP,” he said.

Dr Kwan said the important message during Epilepsy Awareness Month was for people to seek medical assistance if they have had seizures and to be referred to a neurologist for further assessment.

“Early diagnosis is always preferable. We want people to seek treatment and to know there are options.”

“We haven’t found a cure yet but we have more treatment options available now than ever before.”

Dr Kwan said his research was dedicated to finding a cure for epilepsy and learning how to prevent it from developing.

“A world without epilepsy is what we are aiming for.”