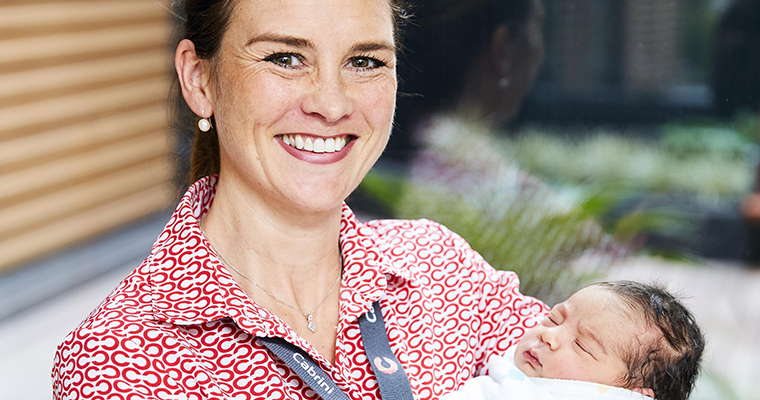 It’s a connection that goes back 42 years, and one Jacinta Bradshaw hopes will continue for as long as possible.

In June of 1977 Jacinta was born at Cabrini hospital, but she wouldn’t realise until today just how deep that connection would run.

After finishing school Jacinta decided to pursue a career in nursing but quickly decided it wasn’t the right time and switched her focus to tourism.

“I went off and did travel and tourism but I missed the nursing. I remember my husband saying, ‘just go and do it’.”

She ended up studying pathology and working for Melbourne Pathology, but still wished she had completed her nursing degree.

In 2004, Jacinta was pregnant with her first child, and made the decision to have her daughter, Sophie, at Cabrini.

“We lived close by and I was born there too,” Jacinta said.

She said Dennis Price was their chosen obstetrician. She found Cabrini “really homely, cosy and nice. I really liked the atmosphere there”.

So when it came to falling pregnant with her second daughter Emma, in 2007 – it was back to Cabrini for the Bradshaw family.

“I had my girls and that’s what gave me the hunger to be a midwife,” Jacinta recalled.

So years after putting her nursing career on hold, Jacinta returned to study and last year ended up at Cabrini as a student midwife.

She said other midwives and staff found out about her connection to the hospital and told her she should apply for a job.

“Cabrini advertised the graduate midwifery program and I was lucky enough to get it.

“I didn’t picture myself anywhere else, I want to stay at Cabrini until I’m old!”

When the year-long program finishes in February Jacinta will apply for a permanent position.

“I just feel like I’m part of the place, like I fit and it’s meant to be,” she said.

“It’s nice to see new families bring their relatives in here. It’s a really nice environment to work in and that makes you feel a bit more part of it.”

Jacinta said while studying midwifery and managing a household at the same time was “the hardest four years of my life”, she was proud of her achievements.

“It’s something no one can take away from you,” Jacinta said.

“If you’re too scared to do something, just have a go – no regrets.”