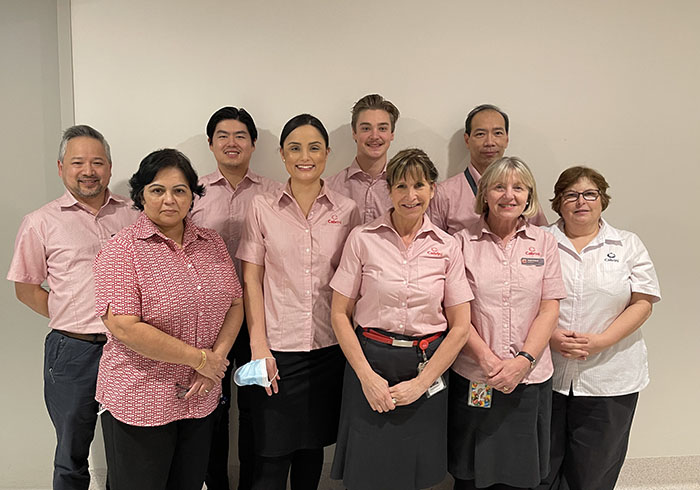 It’s been a year since Dawn Lawless was told she had suffered a stroke, a diagnosis that took her completely by surprise.

Fortunately for Dawn, the impacts from her stroke were minor and the cause was found quickly.

But not everyone is so lucky.

As part of National Stroke Week (2-8 August), Dawn is sharing her story in the hope of encouraging others to not only look after their health but be aware of the signs and symptoms – not just for themselves but for loved ones.

Dawn was on her way to take out some rubbish last June and started to feel unwell. She said she was experiencing disturbed and blurry vision and a general feeling of being unsettled.

She immediately phoned nurse on call and within 30 minutes of that conversation Dawn was in an ambulance on her way to Cabrini.

She was taken straight to the emergency department.

“It was a bit confronting,” Dawn said.

“The bright lights and the waterfalls in my eye had ceased but I was taken through anyway and they were very, very thorough.”

Dawn said because of her symptoms doctors initially raised the possibility of a migraine, because often migraines could mimic stroke symptoms. After running initial tests, Dawn was discharged on a plan to return to Cabrini for an MRI within a couple of days.

A few days later the mother of two and grandmother of five drove herself back to Cabrini for an MRI. Following her procedure she was told to go straight to the emergency department.

Dawn was then told she had suffered a stroke and had two clots on her brain (posterior cerebellar artery stroke).

“That was the last thing on my mind,” she said.

“I couldn’t quite take it all in because I was feeling okay. It was quite overwhelming.”

Dawn was then put into the care of Neurologist Dr Jorge Zavala and Cardiologist Dr Bruno Martin, to determine the cause of her stroke.

She was told she would undergo a transesophageal echocardiogram, to examine her heart, and it was there she met Cabrini Stroke Care Coordinator Suzy Goodman.

“That day I met Suzy I was feeling extremely vulnerable and overwhelmed. She really helped me by imparting her knowledge. She was also in the room with me when the doctor was explaining the procedure. It was good to have someone who wasn’t a specialist that was on my level of understanding. It was so important to me at that time.”

Testing showed Dawn’s stroke was caused from atrial fibrillation, which caused the clot to form and travel to her brain.

Not long after, Dawn had a loop recorder inserted into her chest, which monitors her heart rhythm.

About 10 days after her loop was put in, Dawn had a close call (the loop recorder detected an irregular beat) and doctors immediately put her on blood thinners to prevent another clot forming.

“I’m very, very lucky. I don’t think I’ll ever be quite the same. It was such an intense experience. You never know when it can happen. Sometimes I don’t have as much energy as I used to. But I’ve come out of it very, very well,” she said.

Dawn said National Stroke Week was a reminder of how lucky she was.

“If I hadn’t have gone to Cabrini I wouldn’t be here.”

She said her advice for others was simple: “Seek intervention early, make the symptoms known and if you don’t feel quite right get checked. It’s made me review and evaluate lifestyle factors and deal with stress in a different way.”