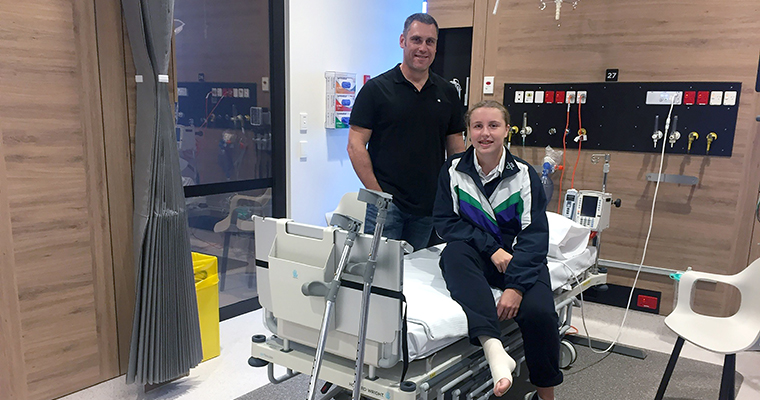 The Gandel Wing received its first patients to the expanded Alan, Ada and Eva Selwyn Emergency Department on 15 July – fittingly on St Frances Xavier Cabrini’s birthday, the missionary sister who established the order that took over the hospital in 1948.

One of the first patients to experience the expanded emergency department was 15-year-old Beyonce Wigg, who received treatment following a football injury over the weekend.

Beyonce sustained a ligament tear after going in for a kick of the ball while playing in the ruck for the St Paul’s McKinnon JFC in the first game back after the school holiday break.

It was trip down memory lane for dad Ashley Wigg, as Beyonce was born at Cabrini and it has been the family’s local hospital since she was born.

“We have visited Cabrini’s Emergency Department many times and have always had positive experiences. As soon as she was injured, we jumped on Cabrini’s website, saw the short wait time for the ED and brought her straight down,” Mr Wigg said.

“It is handy to have such a great facility so close to home and to have everything you need in one place. Following her treatment with the doctor on the weekend we were able to have a follow-up appointment with the ED sports physician and physiotherapist and have booked her in for a physiotherapy appointment later in the week.”

“Having both a doctor and physiotherapist who have been involved in sport at an elite level is reassuring. You know you are getting the best care and treatment to help get these junior athletes safely back out on the field as soon as possible.”

Beyonce was thankful that the damage was not as bad as originally suspected.

“It looks like I might be able to get back on the football field within a couple of weeks, which is a really good outcome,” she said.

As part of Cabrini’s partnership with the South Metro Junior Football League (SMJFL), Cabrini will subsidise 50 per cent of any SMJFL player’s visit to the Emergency Department throughout the 2019 season. The partnership provides players, umpires and spectators with reliable and sound medical care if injured during a match.

Cabrini is also offering a follow-up bulk-billed Sports Physician visit for any SMJFL player who has attended the Emergency Department on a weekend.