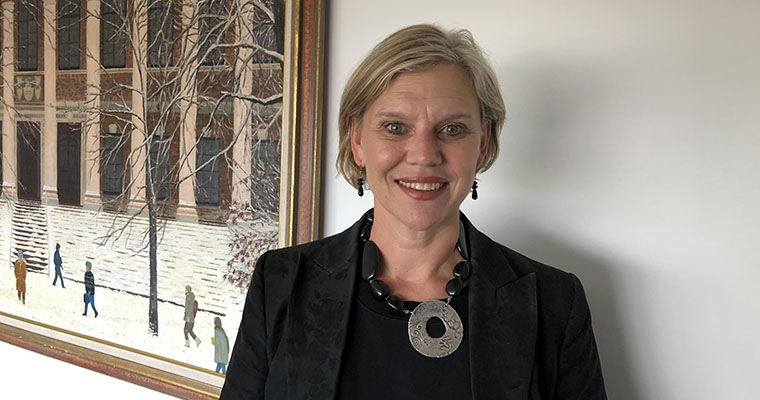 The future for women with ovarian cancer is one that’s looking brighter than ever before.

With every day that goes past more and more research is delving into possible early detection tests and ongoing treatment options.

As part of Ovarian Cancer Awareness Month we are shining a light on the services we offer and the doctors making a difference to the lives of those affected.

Cabrini is at the forefront of clinical research that could change the outcome for many patients.

Cabrini surgeon, Professor Tom Jobling OAM, said current research at the Hudson Institute of Medical Research was looking at a new protein, which was involved in immune surveillance in the body.

“That’s currently underway, in terms of exploring the expression of this protein in early stage cancer but also looking at high-risk groups, such as the as Ashkenazi Jewish population, both here and in Israel we’re doing some testing through Hudson, but we will be collaborating with doctors at Cabrini,” Prof Jobling said.

“The other thing we will trial will be a new treatment involving a protein, which is expressed on the surface of ovarian cancer cells, which makes the cells more likely to invade. If we knock that protein out it stops the metastasis and kills the cancer – so that’s a great new hope that we’re exploring now. We’ve done the preliminary experimentation and we hope to move to clinical trials with patients soon.

“It’s probably the best news that I’ve had in my career, it’s very promising.”

Cabrini medical oncologist and cancer genetics specialist Dr Yoland Antill is also at the forefront of research into ovarian cancer both in the treatment setting, but also in understanding whether an individual has developed ovarian cancer because of a fault in a gene that would normally work to protect them against cancer.

Dr Antill said what initially drew her to oncology was the variety of cancers but in many cases the “opportunity for managing a disease where there was a truly curable setting”.

Her interests in cancer genetics developed alongside her oncology interest, and she now finds them a helpful partnership.

“When I started my practice genetic testing was rare and there were no targeted treatments or differences in the way we looked after individuals whose cancers had occurred because of a fault in their protective genes,” she said.

“Research in ovarian cancer is one of the first and perfect examples of understanding genetically how the cancer had occurred in the first place, and then applying a targeted treatment aimed at the specific faulty genetic pathway.”

Dr Antill said following the findings from The Australian Ovarian Cancer Study, lead by Professor David Bowtell, they found that around 15-20 per cent of the most common sort of ovarian cancer was due to a fault in one of the BRCA genes and that there was a need to address a change in the way they offered genetic testing to women with ovarian cancer.

“Around the same time, research showed that by using a target therapy in women with BRCA related ovarian cancer, known as a PARP inhibitor, that significant improvements in treatment outcomes were gained both in the early and later stages of ovarian cancer treatment,” Dr Antill said.

The use of this targeted therapy has seen a greater number of women successfully treated for their ovarian cancer.

Dr Antill together with a team of researchers evolved a method of introducing genetic testing to women with ovarian cancer at a much earlier stage in their treatment, in their own hospital, and only requiring referral to the specialist Family Cancer Centre if a genetic change was found or there were other specific needs for the women.

This sort of gene testing is known as mainstreaming, or genetic testing by a non-genetics specialist. It allows women and their doctors to consider gene testing to better understand the right treatments for their cancer and to allow other family members to consider testing to allow early screening or prevention of cancers.

Dr Antill and her co-researchers have conducted a national series of education seminars to train non genetics specialists and have assisted in the development of an online educational tool to assist in ongoing training.

She said as a cancer genetics specialist, she felt it was important to offer gene testing to all women with ovarian cancer.

“We wanted to broaden this opportunity for gene testing to every woman in Australia who has ovarian cancer.

These are just two examples of the research being done in ovarian cancer – all aimed at improving the future for patients and their families.”