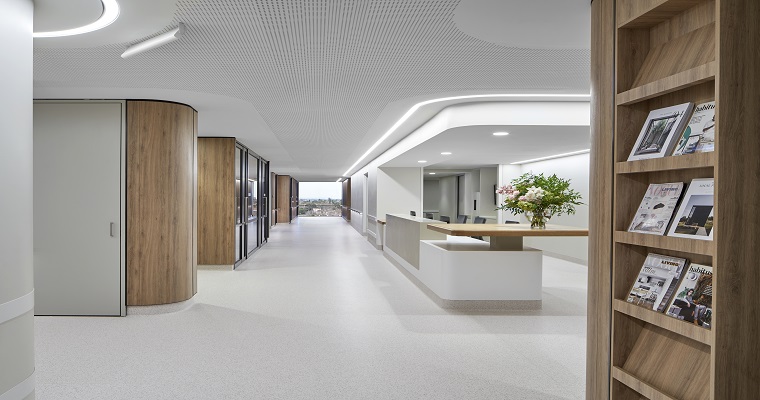 The Cabrini Gandel Wing at Malvern has taken out an award in the Corian Design Awards 2019.

The award is a testament to the hard work that went into selecting appropriate materials in the design of the Gandel Wing to ensure higher levels of patient safety and comfort were achieved.

Bates Smart, the architectural firm behind the Gandel Wing, was a joint winner of the award, which focussed on the use of Corian in different design contexts.

Bates Smart Studio Director Mark Healey said Corian was used throughout the Gandel Wing because of its versatility.

“Corian has inherent anti-microbial properties, can be easily cleaned and repaired if damaged, which is critical in a hospital environment,” he said. “It can be welded seamlessly together and moulded into soft welcoming forms.
The colour palette is timeless and elegant.”

“We used Corian for the baby baths and change stations in the en suites of the maternity rooms, integrating standard Corian baths into the joinery unit, serving its clinical purpose.”

“We also used Corian for the clinical basin and surrounds in patient rooms, with integrated glove dispensers and lift-up panels (concealing hand washing equipment) as well as reception desks throughout the Gandel Wing.”

Mr Healey said the award was about using materials in clever ways.

“Awards like this are recognition of thoughtful use of a material that can enhance the overall design outcome and better realise Cabrini’s vision for the Gandel Wing. We have been able to achieve the clinical needs of the hospital while presenting it in an aesthetically pleasing way.”

“The Gandel Wing was a design-led project with a clear client vision, I feel we have been able to achieve that vision by designing a hospital that is clinically functional but maintains high levels of architectural and interior design integrity.”

Learn more about the Gandel Wing.