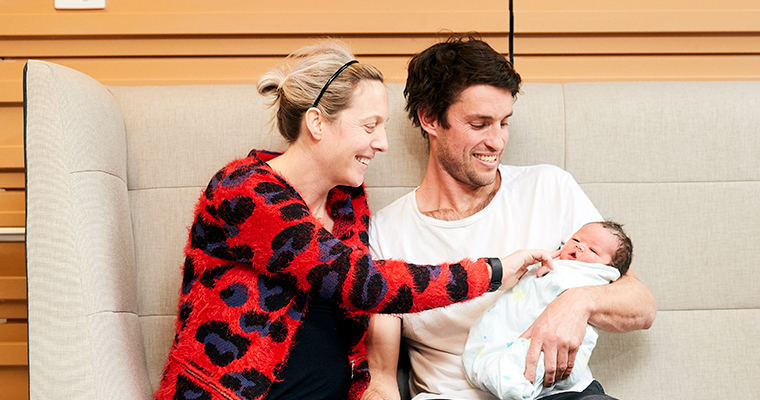 Two families and two completely different births, but two beautiful babies at the end of it all.

New parents Nick and Tess Arnold and second-timers Michael Atkins and Amy Shaw were among the first to experience Cabrini’s new maternity ward in the recently opened Gandel Wing.

For Mr Atkins the stay was nothing short of great, even though just a few hours after his second son Freddie was born he had to make a mad dash to his building exam.

Surviving on minimal sleep and three coffees, Mr Atkins said he could laugh about it now.

“That was pretty funny – I reckon I passed it though.”

Mr Atkins said his partner was “incredible” during Freddie’s birth.

“There was a moment she was really struggling, she was absolutely spent, but she got him out – it was absolutely incredible, we were all cheering – like I will be when St Kilda win a flag!”

The Chelsea Heights couple said initially they chose Cabrini based on recommendations from friends and said it was the obvious choice the second time round.

“It was a no brainer to go back and have our second at Cabrini,” Ms Shaw said.

“The birth suite and level of care after the birth were massive deciders.”

As one of the first families to stay in the Gandel Wing, Ms Shaw described it as “amazing and just what you need after birth”.

“All the people who were in there – everyone working as a team. It was really good.

“We went to The Como Melbourne (hotel) for Alfie but this time they asked and we said no, we’d rather stay here! We really enjoyed our stay.”

Mr and Mrs Arnold said while the birth of their daughter, Cora, was long and ended in an emergency caesarean, their stay in the Gandel Wing was like being in a hotel.

“The midwives were awesome, they gave us so much information. It was so nice to have input from everyone.

“We stayed in the new wing (instead of going to The Como Melbourne hotel), we felt like it was a hotel anyway!”

The Mordialloc couple, both teachers, said finding a name for their baby had been a hard task because they wanted a name neither of them had come across before.

“She was a surprise. Tess had a feeling it was a girl but I had no idea,” Mr Arnold said.

“We came across the name about six months ago. We’re both teachers, so we tried not to pick a name we knew or of a child we had taught. It really suits her.”