The face behind the new service: Meet Sharon Sherwood 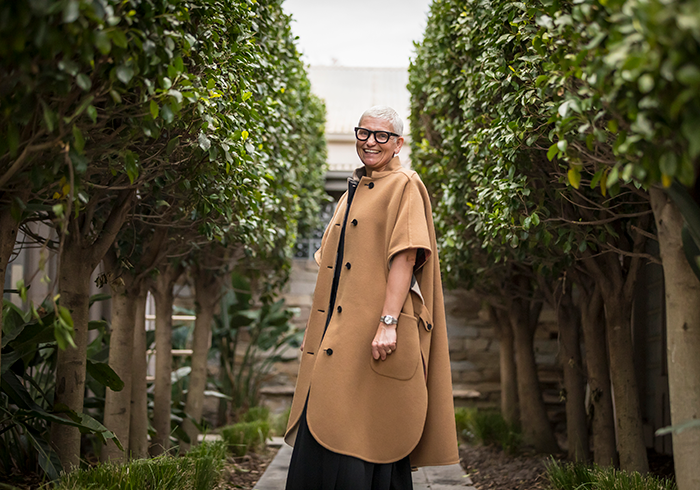 When it comes to heading up the country’s first private, women’s-only mental health hospital, it’s safe to say there’s no one more qualified than Sharon Sherwood.

We felt the timing was perfect, with this week being Women’s Health Week, to not only introduce the new service but find out more about Sharon’s passion for aiding women to recovery, and her exciting new role as Cabrini’s Chief of Mental Health.

Sharon grew up in the UK in Barnsley, a small mining town in Yorkshire. She was one of four children; her older sister was born with spina bifida and her mother had undiagnosed obsessive-compulsive disorder. Life was hard and she knew there was more for her than what that little town offered.

“This is where my passion for mental health started,” she said.

“Growing up in my family we just thought everyone was the same. My mum was an obsessive cleaner and in retrospect, we led a bit of an odd life. She cleaned all the time, so much so that her hands and knees would bleed.

“Every morning our routine was to strip all our bedding and my mum would spend the day washing and ironing.
We ate sandwiches with no hot meals because it would dirty the cooker, but we didn’t even question it, for this was our normal. We would ride horses, travel to the seaside but my mother did not get to experience any of that – she stayed at home.”

Sharon said it wasn’t until her late teens, where her mother’s inability to leave the house led her to realise that something wasn’t right.

“That’s why access to services is my passion. Living through such hardship helped me to shape a desire to help change people’s lives. It starts with education, helping women just like my mum to identify that such debilitating illnesses can in fact improve,” Sharon said.

While it was most common in a town living under the poverty line for a woman to adopt a household role and quite rare to even finish school, Sharon was determined to break this cycle. She said because of this she was an outcast but worked hard to get where she is today.

Starting her journey in physiotherapy, Sharon was not convinced that was the path was for her. It was during her grad year and her last rotation that her life was about to take a turn for the better.

“My last rotation was in mental health and I just went ‘this is it, this is my place’. I went back to university and completed my nursing degree. I was exposed to a wide array but more importantly their wide range of issues, this built the concept in my mind that healthcare cannot be standardised – something I carry with me to this day.”

Not long after finishing her studies, Sharon got married and had two children, while working in acute mental health hospitals in the UK. But eighteen years ago, and three days before she had her daughter, Sharon’s mother died of ovarian cancer. That was her turning point.

“I was so close to her and in that moment, I re-evaluated life in its entirety. It’s short and we don’t know what’s around the corner. I said to my husband, ‘let’s do something, let’s go and live in Australia’.”

And just like that they did. In 2004 she and her family made the move to Melbourne, but it wasn’t easy. From the shock of relocating with no family and friends, to the massive change in workplace, lifestyle and culture. She knew deep down that the struggle would be worth it for the greatest things are born in discomfort.

“There was no segregation in gender, we had female and male wards in the UK from 2002. There was a lot of seclusion here too. My ethos is about managing people in their community, and in their homes, with the least amount of restrictions. That’s the ideal model,” she said.

Sharon’s first role in Melbourne was with NorthWestern Mental Health, where she ended up staying for nine years as a mental health nurse, clinical nurse educator and finally senior nurse. It was in this role that Sharon’s monumental influence became evident.

She then moved to their Sunshine hospital and became a unit manager, a role she loved. From there Sharon said she took on an area manager role for adult mental health at The Austin Hospital and then went on to Peninsula Health as director for mental health for three years.

“I then took on a role at ermha365, a small mental health and disability organisation, and I entered a different world. My passion came back. In public health it’s so intense and relentless, people are coming through constantly. You get a workforce who are saturated. They were there because they love what they do and I saw kindness again.”

Initially when she was told about Cabrini’s plans to open a mental health service, Sharon said she was happy to stay where she was – until she learnt it was a women’s-only facility.

“That was it, I was in. I would do this for her, played in the back of my mind,” she said.

“I read up about Cabrini, there was something just in the literature I was reading that absolutely drew me in. I felt Cabrini had something special to offer, I was aligned with the values and mission and for one of the first times in my career they aligned with mine. From the moment I walked in, I’ve just loved it. Providing this safe space for people, no seclusion, handpicked staff who are trauma-informed and who are kind and welcoming.”

Sharon said there was a noticeable gap for women who were middle-class and “shouldn’t be seen to be having a mental illness”.

“There is a gap and there’s a need because these women do not access public health services. There’s a stigma.
This is not only a group of women that are not accessing these services but the minority of women that make up Australian society.”

Sharon said her hope for the new service was for mental health to be embedded into everything Cabrini does, and for it to eventually grow. To extend beyond this branch of healthcare provided by Cabrini into its mission as a service.

When asked about her key messaging for all women this week, Sharon said it was more important than ever to start conversations about mental health.

“Everyone has a story and it is by sharing those stories that we as women help not only ourselves but each other.”

Sharon also added that the global COVID-19 pandemic had “magnified” mental health for a number of women, with social isolation, working from home and managing children and households adding to the stress.

“But what COVID-19 has also done is get us talking about mental health,” Sharon said.

“There’s a quote from Winston Churchill who says, ‘Never let a good crisis go to waste’. This is our time to talk about mental health, to get it out there. This is only the beginning.”