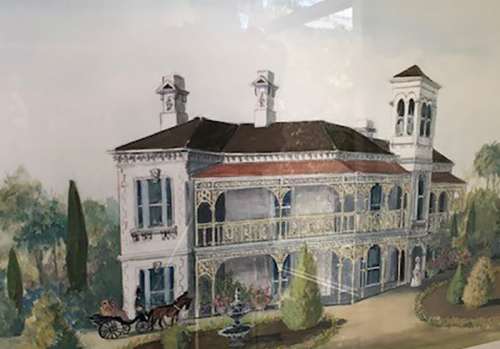 Formally known to our local community as Cabrini Hopetoun, the site, 2-6 Hopetoun Street in the heart of Elsternwick, has a long and fascinating history.

Now known as the Lisa Thurin Women’s Health Centre at Cabrini Elsternwick, Australia’s first private, women’s only mental health facility, we got in touch with its former owners to find out a bit more about the 100-year-old building.

Campbell and Pat Telford owned and operated the premise, which they lovingly referred to as Hopetoun, from 1989 until Cabrini acquired it in 2007.

But prior to that, the building was well-known in the medical world.

Prominent Melbourne architect from the 19th century, Charles Webb, completed Melrose (as it was known then) in 1896.

Webb’s work also included The Windsor Hotel, Royal Arcade, The South Melbourne Town Hall and The Alfred Hospital. He also designed a number of residential properties around the Brighton area, including his own house Farleigh in Park Street, Brighton.

After Webb died in 1898, his daughter took over Melrose and retained it as an investment.

Mr Telford said it was believed that at some time, possibly in the 1930s, the hospital included a maternity wing, which was evidenced by some of the elderly rehabilitation patient’s years later who told of being born at the Hopetoun Street site.

In the 1960s the hospital changed to a medical hospital, catering to private patients referred by local GPs.

In 1980, the then Victorian Health Department decided that the upstairs was no longer suitable for patients, because paramedics had to carry patients up the stairs and it was considered unsafe.

“It was at this time my wife Pat was the Director of Nursing and together with another nurse, Lynne Byrne, proposed to take over the lease,” Mr Telford said.

“It was on the condition we got approval from the Health Department to continue operating for a sufficient period of time, and to build a wing along the rear of the building to accommodate 20 beds and a new kitchen.”

Mrs Telford said she loved working at Hopetoun, and had many fond memories of her time there, including stories of ‘Lady Hopetoun’.

“There were many stories of our ghost Lady Hopetoun. She wore a long white flowing frock and many patients and staff saw her in our corridors,” Mrs Telford said.

“She was a nice ghost – I never saw her and once our renovations were done she wasn’t seen again.”

In 1989 the Telford’s bought out the partnership and in 1990 Mr Telford, having worked elsewhere, joined his wife and they purchased a house at 6 Hopetoun Street. This allowed them to convert the hospital into a rehabilitation facility complete with physiotherapy, hydrotherapy and occupational therapy, and specialising in post orthopaedic patients.

“Finally, in 2002, we purchased two semi-detached houses at 2 and 2A Murray Street where we subsequently built the back wing, increasing the capacity to 30 beds all in single rooms,” Mr Telford said.

Mrs Telford said they felt “very proud” when Cabrini purchased the hospital and was over the moon to learn the hospital had now become the Lisa Thurin Women’s Health Centre, Australia’s first private, women’s only mental health facility.

“We think it’s a fantastic idea, concentrating on women’s mental health is fabulous.”