The importance of speech in everyday life 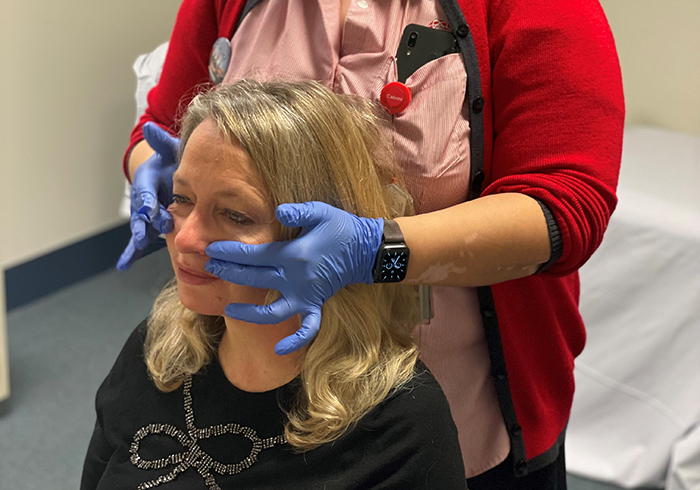 It’s been three months since Rachel realised her ability to smile had disappeared.

And after just a couple of days, Rachel was unable to move either side of her face, couldn’t speak clearly and was having trouble keeping fluids in her mouth.

She came to Cabrini and was assessed by our speech pathology team after it was found Rachel was suffering from bilateral Bell’s Palsy, complete or partial paralysis of the face.

As part of Speech Pathology Week, Rachel wanted to share her story with others to help raise the awareness of not only this condition, but the role of speech pathologists in hospitals.

Rachel said initially when she realised she couldn’t smile she ignored it, thinking it would come right.

But after symptoms worsened, she said she started to feel “embarrassed and ashamed.”

Following two hospital admissions at Cabrini, Rachel said she was happy to meet with one of our speech pathologists just so she could eat.

“It wasn’t until things got to a fever pitch and the speech pathologist offered to talk to the neurologist that I acknowledged my other feelings,” Rachel said.

“It was attending speech pathology appointments that allowed me to see that something was wrong.”

Rachel said while in hospital the hardest part was not being able to engage with people properly.

“I had to find new ways of communicating, sharing, and supporting the ladies who were with me – it’s part of the hospital experience.”

Her speech pathologist, Nicole Reyes, said Rachel had a few challenges with getting certain sounds out.

“So we looked at how to get the lips positioned and the face taped in order to achieve clear speech,” Nicole said.

“We don’t think about it, but our face muscles do so much: eating, talking, and smiling – so many things we do throughout the day.”

After her second admission, Rachel said she had an appreciation for what speech pathologists could offer.

Three months on, Rachel is progressing well. Her smile is not yet one hundred per cent, but it is undeniably a smile.

“Speech Pathology was a big part of my recovery,” Rachel said.